You are here: Home / DOT Medical Requirements / Can A DOT Medical Examiner Refuse You A Medical Card Unless You Have A Sleep Study Done?
This is Part 1 of a 5-part series on Sleep Apnea Affecting CDL Medical Certification:

Commercial drivers are being told by some DOT medical examiners that they must be tested for sleep apnea before they can get a new medical card.

We’re seeing much confusion and frustration in the questions drivers are asking us on our FAQ forum.

“Does you neck have to be a certain size? They tell me I have to have a sleep study”

“Some examiners are requiring drivers to go have sleep studies done based solely upon BMI and neck circumference. How can that be? “

“My husband who is 53yrs old just went for a physical to renew his medical card. They told him because he was over 50 and his neck was 17.5 he had to do the sleep study. I’ve been told by others that the age criteria is 55 and if neck is over 17in. Which is correct? “

“I recently went in to renew my CDL and everything checked out normal. However since I was over the age of 42 and I am a male, the doctor gave me a 45-day temp card and told me before he could give me my 1 year medical card I had to get a sleep apnea test done. My neck size and my BMI checked out normal. Can he do this to me? “

So why are so many people – doctors, as well as drivers – confused on this sleep apnea issue?

We’ve attempted to follow the breadcrumbs over time, to see how this predicament developed. Put In A Nutshell

FMCSA has been called on their lack of proper rule making procedures regarding sleep apnea screening i.e. how to determine who should be tested.

The last response we can find from FMCSA on this issue is that “FMCSA will issue a notice to address obstructive sleep apnea through the formal rulemaking process after collecting and analyzing the necessary data and research.” As we publish this article, there is still no information available from FMCSA regarding sleep apnea screening.

There is currently no ruling by the FMCSA for sleep apnea screening on DOT physicals.

DOT medical examiners are finding themselves caught between a rock and a hard place on this issue, as they are held responsible for ensuring that a driver is medically fit to drive a commercial motor vehicle.

Your employer may have more strict requirements and is allowed to impose their own screening criteria. A company must a least meet the FMCSA medical requirements. However, company policy may impose stricter standards than those required by FMCSA.

Thanks to Trucker Docs expert panel doctor, Dr. Kenn Seals, for contributing to this article.
You can find Dr. Seals at Chiro Stop in Salt Lake City, UT.


We are DOT certified medical examiners, and we're around to answer questions - especially those tough ones related to a driver's personal circumstances - that no-one else is answering. 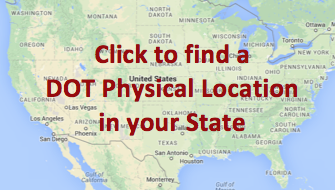 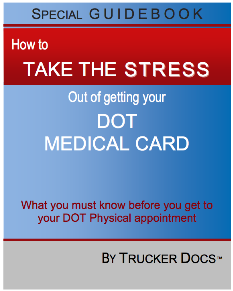 What you need to know about getting your Medical Card.
Get the GUIDEBOOK here

The information provided on this website should not serve as a substitute for professional medical care. Please see a qualified medical provider if you have any concerns about your state of health.